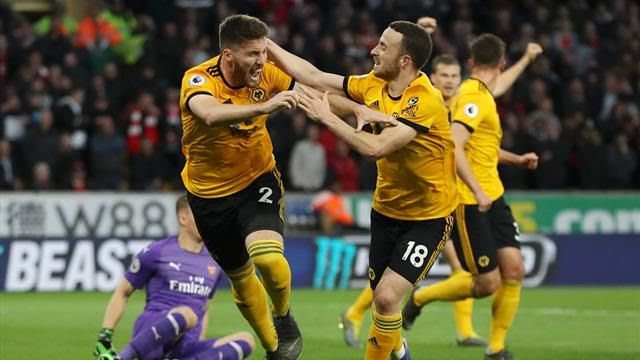 Arsenal’s hopes of securing a top-four place were dealt a blow as Wolves cruised to a 3-1 Premier League win at Molineux on Wednesday.

Any thoughts the Gunners would return to winning ways after Sunday’s damaging defeat to Crystal Palace were extinguished during a 17-minute spell in the first half, which saw Wolves score three times.

Ruben Neves got them up and running with a glorious free-kick shortly before the half-hour mark, while Matt Doherty and Diogo Jota put the game to bed before the interval after some generous defending from Unai Emery’s side.

Defeat leaves Arsenal – who scored a late consolation through Sokratis Papastathopoulos – a point behind fourth-place Chelsea, while Wolves are now one point ahead of Watford in seventh.

Arsenal dominated the early exchanges but it was Wolves who carved out the first clear openings, Joao Moutinho whipping wide from 20 yards and Raul Jimenez prodding over from close range.

Neves’ fourth goal of the campaign set them on their way after 28 minutes, the Portugal international curling a 25-yard free-kick inside Bernd Leno’s right-hand post, before Doherty headed Jonny’s cross past the flailing German goalkeeper nine minutes later.

Jota then rounded off a stunning first-half display, jinking past two defenders and squeezing a low shot through the weak resistance of the beleaguered Leno.

An Arsenal comeback failed to materialise in the second period and Jimenez should have added a fourth for the hosts after 68 minutes, the Mexico striker blazing wide after a flowing move.

Sokratis headed home Granit Xhaka’s corner 10 minutes from time but the damage had been done during that blistering first-half spell as Wolves secured a first ever Premier League win against the Gunners.

Arsenal were rotten and can consider themselves fortunate to still be in with a shot of qualifying for next season’s Champions League with three matches left to play. A combination of haphazard defending and impotent attacking was their downfall and they will need a dramatic improvement if they are to sneak into the top four.

Wolves, meanwhile, have exceeded all expectations during their first season back in the Premier League and put in another performance that suggests they fully deserve their current status as ‘the best of the rest’. Carry on like this and they could well be pushing for a top-six spot next season.

Neves, the 22-year-old has scored a host of stunning goals from long distance since his arrival from Porto and he added another to his highlight reel with a glorious free-kick that gave Leno no chance. From then, Wolves did not look back.

Leno has largely impressed since taking over the gloves from Petr Cech earlier in the campaign, but he had a game to forget at Molineux. His attempt to claim Jonny’s cross for Wolves’ second was pitiful and he should have done better with Jota’s low strike.

You cannot live a normal existence if you haven’t taken care of a problem that affects your life and affects the lives of others, values that you hold which in fact define your very existence.