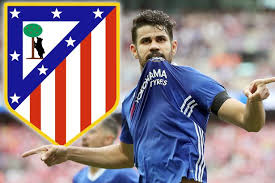 Atletico Madrid have made a final bid of £57million for Diego Costa, Chelsea forward. The striker who was an instrument to Chelsea victory of the Premier league trophy last season is looking for a way out of the club.

The Rojiblancos have tabled a ”take-it-or-leave-it’ bid of up to £57million, which would consist of £48m up front, plus £9m in add-ons. They were unable to secure his services in the summer due to their Fifa-imposed transfer ban.

Atletico will not increase their offer for a player they are aware is surplus to requirements at his current club.

It had been reported in Spain that Costa would be in attendance for the grand unveiling of the new Wanda Metropolitano Stadium on Saturday evening, however, they turned out to be false.

Should Chelsea accept the bid, it would easily surpass the £35m they paid Porto for Radamel Falcao in 2011 making him the club’s most-expensive player ever.

Costa is desperate to leave to give himself any chance of making Spain‘s World Cup squad.

Blues boss Antonio Conte was reported to have told the striker via a text message that he does not feature in his plans.

Chelsea signed forward Alvaro Morata from Real Madrid as a replacement, who has settled well in the West London side scoring three Premier League goals in five matches this season.